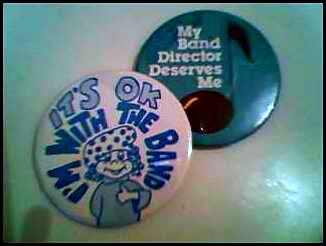 Second or third day working eleven hours at my desk seem to make me a little loopy. In those moments I'm somewhat touched that a trade mag used one of my quotes. Granted it was self supplied PR dribble I wrote in ten minutes; I just didn't realize that it would be incorporated into the feature article.

And when I found a mystery package from B in the mail, I found myself ecstatic over the contents: vintage high school band buttons dug out from a prehistoric percussion room in Michigan. It's ok I'm with band would make a hella great shirt.

During an office chat yesterday about another trade show in New Orleans I spoke of a finding an old friend* that slipped out of the Bay Area into a bar tending gig on Bourbon Street and rumble bout with rough times. She was alive but I didn't know how well.

Seven years later she chose this morning to find me on myspace, from Portland teaching yoga no less.


* Yes corey, we did date (read the comments)