Showing posts from October, 2009
Show all

October 31, 2009
Reason # 4 Halloween of course! I didn't do anything outstanding this year so I'll leave you with a clip from the Today Show filmed on Friday. If you're in hurry you can jump ahead and watch the last two minutes for the best stuff but it's all good. By the best stuff I mean drunk, groping Ewoks. Oh there's moonwalking too. vid link
1 comment
Read more

Ok I totally screwed myself over with this countdown of why this October has been the best month ever. Seriously, I should know better than to start a countdown at ten considering how inconsistently I blog these days. Oh well, for the combined reasons # 7, 6 and 5 and well worth it I might add: I found the greatest object ever made by mankind A ceramic bird sitting on a frog sitting on a bunny sitting on a turtle!! Which compliments my collection: The ceramic 3 Green Monkeys Holding A Basket on Their Heads, my stolen Lawn Gnome "Gnomey", and my Curious George Flashlight. Otherwise known to B as my collection of mostly monkey related crap that I try to pass off as table centerpieces.
1 comment
Read more

October: The Best Month Ever - Reason # 8 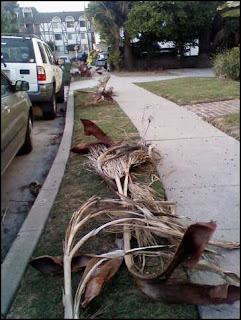 Reason # 8: Fall in Los Angeles. Make all the fun you want about LA's lack of seasons. That's ok, most of the residents seem to be happy enough about how it works out here.  The changes are mild, the days are nearly the same beautiful day after day.  No reason to stress about the weather, dude. For me I do miss the fog and rainy winters of the Bay Area sometimes but I feel like I traded up with our gusty winds and low 80 degree temperatures (give or take) until December. And yes we had some crazy winds this week. Right along the streets of my neighborhood are the pile remains of fallen palm tree fronds after our recent "wind storm". It's hard to tell that six piles lay beyond what you see here in this picture; around the corner on the street lined with those classic 50 foot tall Los Angeles palms their discarded, mangled fronds are piled 7 feet high. Just a lovely Autumn reminder that I'll be able to wear my thin scarf soon! I'll take thes
2 comments
Read more

October 27, 2009
Reason # 9 Jury Duty - or a much needed day off work. lorange I crave nothing more than have a day off from work. Weekends are helpful but I'm talking about a day where I can sit and write, listen to whatever tracks download onto the computer in hopes of grabbing that next inspirational wave. I need this time more than I would like to admit, fearful that this might come off as being a loner, antisocial, devaluing the relationships of my life. I see how that might come off. Have ever blown away the globular head off a dandelion, seeds drifting into a cool valley wind? If I'm not exposed to music or if the words stop coming it feels like I'm chasing down the seeds, seperating along with them. Along with love, friendship, and family*, these are seeds to my completeness. Sometimes a blank moment of time like jury duty does the trick perfectly. *which I'm blessed in spades **( robo.to badge might not be visible on rss (vid and text is not static and might
1 comment
Read more

Reason # 3  October Birthdays Not only did I have a birthday making October my best month ever but my dear Becky is having hers today and so far October has been very good to her too  (this is called foreshadowing). There is a lot of things about her that makes me smile and the biggest is her ablity to make me laugh. Not an easy thing to do, let me tell you. It could be as simple as buying her new favorite giant hat. And /or wearing this giant thing all summer and then pulling out the perfect pose. Or pulling the less than perfect pose just to be as goofy. If I didn't know better I would say she was being just goofy when the dance moves pop out in the grocery store, walking down the street, or well anywhere, anytime.  That's just normal for her. She'll even climb through the cat tree to make me laugh. Yup,she is a keeper in my book. She is going to kill me for posting that last photo. Happy Birthday my love! [Yes this is countdown as to why October
2 comments
Read more

October 25, 2009
Reason # 10 - the internet always win I heard rumblings about this a while ago but this morning I noticed that Mashable posted about this crowd sourced project that was much further along than I realized. I love you internet. The Star Wars Uncut official trailer Star Wars: Uncut Trailer from Casey Pugh on Vimeo . [Yes this is countdown as to why October is the best month ever for me. Your mileage might vary.]
Post a Comment
Read more

me me me me

it's just going take some time, that's all

October 17, 2009
I hit my limit last week. I work hard against the pull of the work drain and deal with the email suckage each morning at my place of employment. Each night is another night of little sleep. damn you thoughts. damn you unrealistic expectations. damn. like glucose film on your teeth no amount of tongue swabbing wipes them clean. like a mosquito's lingering welt, an unstainable itch that remains even in my dreams each night. Expectations have been tackling me. I'm dealing with them one by one - it's just going take some time, that's all. I understand why that kid would want to take off in a balloon
1 comment
Read more

Band: The Antlers Song:   Two -(I also recommend checking out the song Bear for your ipod) Why: I've lost time with this album. First disappearance: evening with a laptop, headphones and this album in the background. Second disappearance: my morning drive to work, this CD in the player. Tonight again, lost in thoughts of you asleep. this album does that for me. THE ANTLERS - Evolving from Peter Silberman's bedroom recordings to a fully realized band, for Brooklyn-based the Antlers, what started out as a solo lo-fi folk project, progressed quickly into a colossal-sounding chamber pop group. After self-recording a handful of albums in a kamikaze fashion, Silberman set forth to record his opus, Hospice, in July of 2007. Recorded over the course of almost two years, Hospice started out as another solo project before Silberman started incorporating other musicians, including drummer Michael Lerner and multi-instrumentalist Darby Cicci, who eventually ended up as permanent
1 comment
Read more 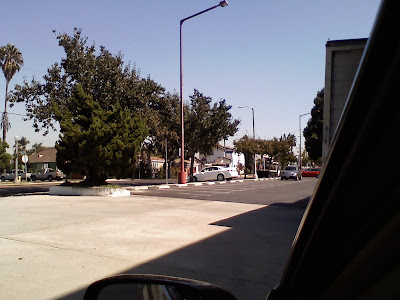 The other day I saw a car that drove off the curb. 2 men were helping the older lady so I ate my sandwich and listened to NPR. Another day I thought maybe my friend had started pimping TOGO'S in his free time. today was a rough day at work today was a great day to eat a hamburger (comfort food for stressed filled days)
1 comment
Read more
More posts