People I love more than anything - Mom! 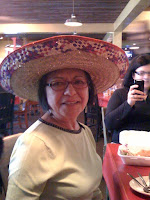 She spoiled me growing up maybe to compensate for being the middle child, maybe I needed it at first, maybe because she still talks about when I was an infant with a crazy high fever and how she panicked not really knowing what to do. With me shivering with fever chills my mom wrapped me up in multiple blankets which of course doesn't help and I would guess my dad seeing me getting worse finally convinced her that despite what little money my family at the time was not to be worried about and a trip to the ER was a must (You have to remember this is before most folks used HMOs, where you paid out of pocket for the dentist, for the optometrist, and especially for ER visits).   Well I ended up in the emergency room where I'm told the doctors gave her grief about what she thought was the right thing to do wrapping me up like that.  The hospital staff quickly swept away from my mom's arms and placed my infant body into a tub of ice to bring my crazy high temperature down, I was that hot.

Neither of us were they same since that night.

Later as a teenager she told me that I was the only one in the family that she could talk to about what was going on in her life, her problems. She worried a lot about me and my siblings though we all stayed out of trouble; we were basically boring, good suburban kids but she wanted the best for her kids and it broke her heart to see us down or hurt. In return I opened up about my situations, (parts of) relationships and regrets though I knew she would take my wins and losses personally.  She meant well but often I would have to push back, tell her not to worry and continue with what I wanted to do and sometimes I did that in crappy teenage outbursts and actions. I was a stupid kid at times.

After my Dad died when I was 17 I did my best to help out but I also did my best to make sure my mom could take care of herself.  I really didn't have to worry: she went back to school, got promoted at work, exercised, started yoga and fostered community field trips and continues to do so as she goes from her 60s into her 70s.

She would come to me with questions or clarifications in what to do at times but would also impress me with stories of perfectly executed snap decisions in crucial moments or her ability to put someone in their place regardless of their size or power. This is probably why employees rallied behind her when she attempt to start a union at her old job after that company went too far in their treatment of workers. After 20+ years there she was pissed and was not going to take it anymore.

I had long learned not to underestimate my mom in those moments.

While my sister and brother took after my dad, it's clear that I take after my mom more (save for the red hair that we all got from my dad). I'm thankful for her genes because we both look way younger than we are and as her mom lived to a damn good 78 years in a third world country with so-so medical care, it makes my plan to do the same somewhat realistic especially now that I take my health more seriously these days.

So yeah, my mom is pretty amazing and genetically gifted too.

Anyhow I told her this weekend how thankful I was for her, for everything she has done for me, how she understands far more than I have given her credit for at times. That I love her and miss her.

Happy Birthday Mom though you will never read this or any blog but boy, she does love her cell phone.

(Picture courtesy of my brother who took my mom to Chevy's and got her tipsy for her birthday.)

~~~
I also want to say Happy Birthday to B's mom because she deserves a shout out too for her recent birthday at the end of March. She is an amazing mom who did a great job with her daughter. I already said so on her facebook page but I'll say it again, Happy Birthday Barb!