October 19, 2010
Going through some boxes looking for something or another I found my stack of concert ticket stubs from back in the day. Back in the day meaning before I moved to SoCal, still aimlessly in the Bay Area catching whatever shows I could afford. I kept to the the small bars and venues so I'm thinking my best friend Corey bought this for my birthday  ::cough:: this thursday the 21st:: cough. $15 was a bit too rich for my blood. 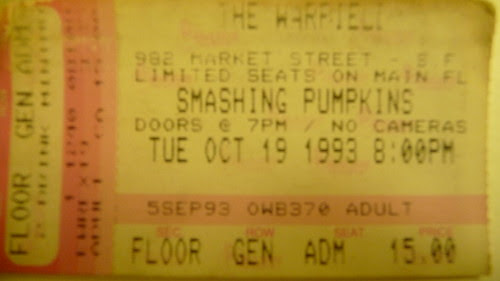 This was just as Smashing Pumpkins were exploding nationwide, pre SNL show, and before they went arena rock. (For you LA folks the Warfield is similar to the Wiltern.)

Because the internerds are amazing you can stream/DL that actual concert here if the embed doesn't work below this sentence.