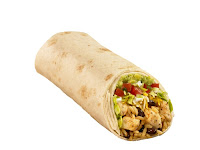 All I wanted was a burrito.

After the last Kiss or Kill, a bunch if us decided to hit El Grande Burrito or whatever that place is called on Santa Monica and Vermont.

Well we went to the burrito place and ran into a crowd about a hundred or so made up of folks looking thuggy, most not or less so, and trannies...who were fighting.

Poor security guard was trying to break up a brawl when another would start a few feet away. Most customers played the part of not concerned, just hungry customer with a careful eye on the action. Those tipsy late night burrito cravings can be that overwhelming and a salsa cup side of punches makes it that more interesting.

When we drove into the parking lot there was one real cop in the street who was waiting for back up until one fight got pretty big. He pulled the cruiser up to verbally assist the security guard; people throwing fists at each other is fairly low in danger, and if you think about it, will continues until a referee breaks it up, friends grab arms, words tossed out into the air.

Sitting in the car we patiently watched this play through, still anticipating our burrito quest conclusion. Cars pulled in, cars backed out. We added commentary. A couple of trannies further back from the action broke into the Honda in front of me, one using a pointless little sparkling jacket to cover his friend reaching in.

People started to throw stuff at the cop car and yeah time to change course for the Brite Spot for our food. No More Delays! we yelled in unison (Ok we didn't do that) as we paused at the intersection for twelve cop cars speeding up Vermont with helicopter support.

The Brite Spot was pretty uneventful.
The soy chicken sandwich didn't quite cut it.