How I came across Kiss or Kill 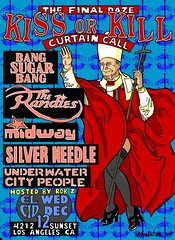 It was towards the end of 2003 and Corey, Cortney and myself were stalking this band Midway all summer and they were booked at some place called Kiss or Kill at the Garage. The line up: She, Midway, Ballentine, Bang Sugar Bang and the Dollyrots - I'd checked online and listened to some mp3s and liked what I heard.

The door chick asked for the two bucks and which band we were here to see. Midway...oh and Bang Sugar Bang. Oh I kind of want to see the Dollyrots too. 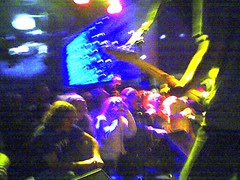 Over the years my answer was usually "Um, all of them."

In this way Kiss or Kill co-existed with the much hipsterized Silver Lake-centric music scene but without regard to what was hip, to what might be Pitchforked so you could say you were there first.

We didn't give too much of a shit about that. It was about a great set. It was about great conversations and if you didn't know the band being discussed no one looked down at you for that. That first night people smiled at you, the bartender was nice, there was great music of course and completely zero bullshit attitude that Los Angeles has a reputation for. 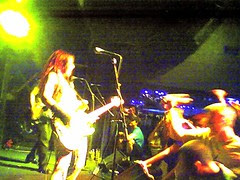 For me trying to put myself together after a long disintegration of a marriage Kiss or Kill allowed me to be that weird guy in the back, that new face thrown around to Bang Sugar Bang sets only to be picked up by a stranger and only after they made sure I was alright. I was learning to be social again after being isolated from creative stimulation. I've been on the far, far edge of scenes before (the Op Ivy, Green Day, Mr T Exp. Skankin' pickle, Berkeley Square, Gilman of the late 80s Bay Area - knowing people, seeing a few shows here and there) so when I walked into the Zen week after week seeing bands that supported each other, the fans and the always quality sets, I now understood the old adage You Know it When You See It. There was something special going on week after week and there was no way I was not going to be part of it.

It was worthwhile to show up early. It was worth staying late. Amazing bands, cheap beer, tequila gun shots, drunken conversations, and crazy crushes made it interesting. Favorite moments: pogo jumping to Midway, looking over to see Zen packed with every head in motion to King Cheetah, sobering up late at The Echo with The Letter Openers blowing my mind, starting the Holy Shit chant for Automatic Music Explosion the first time I saw them at Safari Sam's. The Dollyrots. The Randies. DG. ha.

I want to thank Cooper, Matt, Johnny, Andre, and Siria for their must see you play first booking policy. A couple points which should be noted: The Atomic Missiles and the NYC Street Wave crowd really upped the ante during the Echo period. More importantly, Cooper's letter in the first half of the Zen Sushi period had to be the turning point for Kiss Or Kill. It was heartfelt call to arms that solidified Kiss or Kill the community. It made a difference to many of us by realizing this special thing should be supported and not taken for granted.

It wasn't perfect - it was a scene after all with all the gossip and drama worthy of Melrose Place - but it was special for many of us. We all had busy lives and with what little money I had I commuted a hour each way to work, took a nap showered and drove in 35 miles almost every week for two years. This is how special Kiss Or Kill was to me. And sometimes it was the little things that reminded me why: If someone stepped on your foot or elbowed you they always apologized. Strangers bought me free drinks. I'd bought drinks for people I didn't even like but in the crowd we were all part of this fucked up, creative family - And hell, we all needed a drink in hand for the Beer Song, right?

More How I Came Across Kiss or Kill Stories @ kissorkillclub.blogspot.com

Tonight is the last one folks.
It made the LA weekly pick of the week.
It will be a weird night for me - maybe you too.
Come early - stay late.