Ally McBeal stole the churro that was rightfully mine!

February 22, 2010
It's true. On Sunday February 21st, 2010 I was a victim of a most horrendous crime while on a quick two hour visit to Disney's California Adventures theme park with my kids.

My dear children, untouched by crime children had just entered the queue for Grizzly Rapids so like any good dad who doesn't think walking around on a cold, possibly raining day soaked from this water ride, I stood at the look-out point near what is the San Francisco bathrooms area to wave them off. I smiled towards their raft with the thought that my kids were going to get soaked in their already sick state (did I mentioned they were a tad sick?) on the last ride before dropping them off the Ex's house.*

So this good Dad notices the churro cart nearby and decides that a warm churro would be a perfect snack for some damp kids and myself. I don't know why these fried dough sticks covered in cinnamon-sugar powder are so hella good, but there's always a line to buy them and I'm always lined up behind the other addicts to recieve my dose.

Now in line and one of the customers in front of me turns and it's Callista Flockheart (aka Ally McBeal and also that current show Brothers and Sisters on ABC ). She quietly speaks to her friend and I, like any good Angelino, ignores the fact that she is Ally McBeal aka Mrs. Harrison Ford, with the latter distinction being more notable. To answer your immediate question, dear unknown reader: Yes, she is that thin in person but not in a weird I use meth way too much sort of way. Standing about 5'6" with feet the size of small potatoes, she is simply an abnormally tall, small person.

After a few minutes she seems comfortable enough to start talking at a normal volume. She doesn't say his name (Han F'ing Solo or Indiana F'ing Jones) but starts with He thinks..something about something or some situation. Unremarkable words just like you or me and I gleam nothing interesting unlike that one time with Alice Cooper. 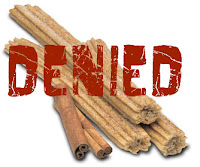 Ally McHarrison FlockFord orders her on singular churro and pays in cash. $3.50. She's polite, says thank you and bounces off with her treat down towards the main gate. I walk up and polietly ask for three churros. The castmember has that oh crap look,"Three?" she cautiously asks. "Yes, three please." She reaches down  below the cinnamon tray and starts loading up that fryer as if she understood my request in only multiples of tens. The guy behind me sighs. I smile patiently for two minutes. I'm not Ally McBeal - I must wait. The guy behind sighs in agreement, apparently not only annoyed with me but blessed with the ability to read my inner thoughts. I'm not Ally McBeal..."The hell you're not!" Great, now he's in my head mocking me. He hates me. I've be reduced to that dancing baby to him.

I am sad, diminished; I've been robbed of a churro that was rightfully mine. 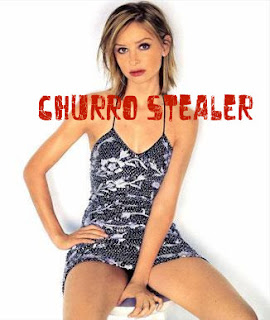 * I'm kidding. I gave my daughter my water proof jacket so she wouldn't get too wet - my son had his on already.
** No, I did not have an ending for this - the churros were good though.
***Also proof that she was there: http://www.flickr.com/photos/disneylandiphone/4379083325/
**** Yes, I get that I was ordering three and would had to wait.