The Son and The Zoo

February 15, 2010
(It was late November when I had a chance to write a guest post for Krista's blog; a post about what inspires us. There were a few drafts that came and went but it wasn't until mid December that I knew exactly what I wanted to say. What you see here is a slightly modified version that was kindly posted at Krista's blog in January. Today is a good day to share it here.)


I spent the last rainy Saturday at the LA Zoo with my soon to be 8 year old son.

He picked out a red shirt to match mine while I insisted on a scarf, wrapping it around his neck just like the way mine twisted. The scarves were not to create LA fashion statements as often the case here but for the real need of keeping our LA not use this cold weather necks warm. Our hands rested in pockets while we talked to each other, picking up identical black umbrellas set by the door on our way out. 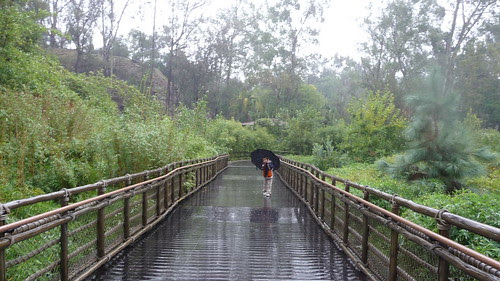 The place was empty with the rain staying somewhere between being brushed by cotton balls or brushed by wet cat fur around bare legs. If you haven't been there before the LA Zoo is laid out between a wide valley of sorts in Griffith Park with exhibits climb up the hill to nearly the top where the chimps and giraffes are placed; You have to go to the top for the good stuff - It's true in life, it’s true at the LA Zoo. 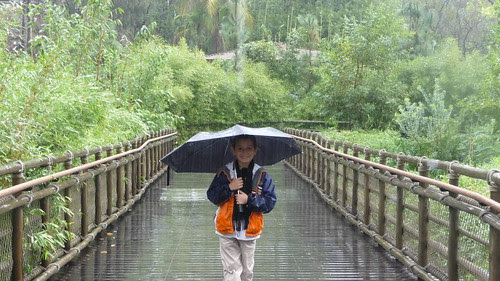 We had our choice of paths that day.

As we left the upper exhibits, making our way down to the exit the rain started dumping, no, really dumping down on us. Storm drain depressions became buried under small ponds. The uphill nature of the zoo created streams and rivers and runs if you come from a place that calls them runs over the paved walkways. Most were easily jumped over by my son but some were so wide that even my jumps landed me still a foot inside the flowing water.

My son yelled, "We're not going to make it out alive!!!" in the same tone he once yelled "We are driving straight into the face of danger!!!" the day he spotted a forest fire smoke plume 30 miles away as we drove to the mall.

I instinctively played along. "I'll save you Jake! Let me throw you across the river!" as I swung him over the a two foot wide stream. This was repeated over and over again the whole way down.

We eventually made to the car in double the normal time and more soaked then we needed to be. If you just happen upon us at that moment looking like the result of performing handstands in a canoe, I would have smiled and simply said, “We were inspired...”