August 25, 2009
One of my favorite bands locally Great Northern play a free show as part of the summer series of concerts Downtown. Wednesday's show fell on the last weeknight produced by good ole Spaceland Productions and GN was an excellent finale. 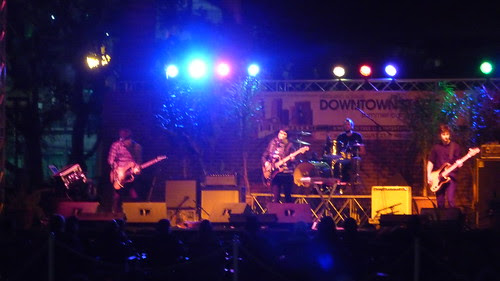 This is not a review. Don't get me wrong I have loved GN for years now but it's hard to be in Pershing Square watching a band and wonder if the attraction is the band or the city itself.  Most buildings sparkled with energy but only hinted at life upon closer inspection; an office ceiling glowed with indirect monitor light, a curtain blew about 14 floors up by the under window fans found often in hotel rooms. Were they here?  I'd argue the air down here is better, with the couples in chairs and beautiful-girl-occupied benches. My placement was far back on the concrete framing blocks loving every sound, my arm as support, the other around my support and her warmth.

All the break ups of the past were worth the admission. 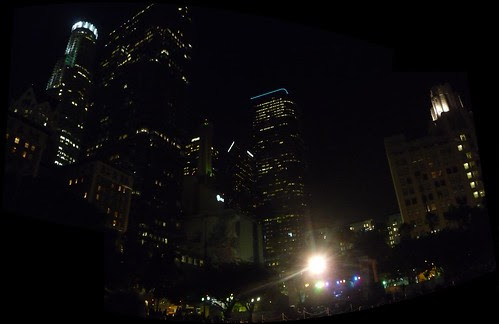 But sometimes the band ends before you're ready to call it a night, that stupid kinder couple talks through most of the set until leaving for a bathroom and sometimes that bathroom in the parking garage is decorated with wallpaper of toilet paper and blood and/or feces (or all three) and you're thankful home is a five minute drive away.

Despite all that I wanted to stay longer. I like Downtown.

Great Northern played off with an acoustic version of "Home" from their first album, easing the crowd into the night, into arms, into the city paved corridors. Here's the video to jar some memories.