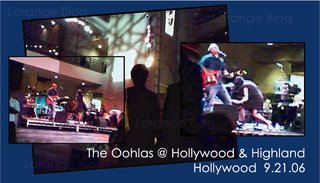 Last Thursday I left my sheltered world of couch and television to catch Irving, Monsters are Waiting and the Oohlas.

Drove out to Hollywood straight after work, did some shopping at the 99cent store in Little Armenia where the cashier eyeballed me for a couple seconds and then offered me the 99cent long distance card.

"...you can call your family out of the country"

I'm wondering as to why she was offering it and who the hell would I call.

"I don't know anyone who lives out of the country, let alone outside California"

She had the odds on her side I guess...

In Hollywood there was little parking because of the Jackass 2 premiere and that cheese festival going on that street next to Hollywood High. As I was driving up Orange I almost collided with Rip Taylor as he jaywalked from the Roosevelt Hotel heading East. Okay I didn't almost hit him but I did imagine him tumbling onto my hood, cracking the safety glass windshield in mixture blob of synthetic hair, blood, sequins jacket bits and glitter sprayed across my car.

Parked by Ihop and read.
Walked around got coffee
Walked backed to the car to get my notepad
Sat at the planter enjoying The Oohlas. I know they're the darling of some blogs and are even one of the first bands to be signed nyc blogger Melody Nelson's new label. If you were a fan of Belly/Throwing Muses/Tanya Donnelly and such you'll like them as I did as each song finished through the the first half of their set.

Then the power went out at Hollywood & Highland.

Various members of Irving and Monsters are Waiting were on the phones or looked a little confused having just showed up as the emergency lights came up. It wasn't that dark actually considering the before and after. That courtyard is in serious need of some dramatic lighting if most people couldn't tell the difference.


Corey eventually showed up and we decided In'n'Out was in order and conveniently in the directions of our cars. Ashley came by but after walking around Hollywood for a bit without a destination in mind we ended up just calling it a night and going home.