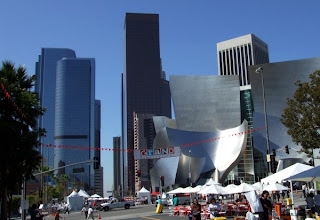 I've been walking down a lot of closed streets lately.

Saturday was Detour Fest, my second weekend walking along the avenues in downtown Los Angeles. The week before was the Grand Avenue Fest which had free performances at the Walt Disney Concert Hall by the Los Angeles Philharmonic, free admission at MOCA, and various events at the Colburn School of ballet, music, and mime! oh my! - where I wasn't the only one who thought their cafe rocked (see blogdowntown's post) especially price wise in comparison to the food booths that day.

Now MOCA had some fun stuff going on there: One side was mostly set up for the Gordon Matta-Clark exhibit (see lightning history's post) but we walked in towards the latter part of the day so we had to rush through this a bit fast.

The other side was dedicated to the Cosima Von Bonin: Roger and Out exhibit that was neat*. I would've spent more time looking if it wasn't for the frazzled guards yelling at everyone to stand two feet back, causing people to step back into other patrons or the other art pieces already packed so closely within.

By 5pm we had enough of the guards that hated pretty much every one and so turned to the embrace of the emptying street outside, towards home to feed the long festival day of built up hunger. Any longer and I would have put those guards to shame.

*read art.blogging.la if you want real thoughts about art in LA.