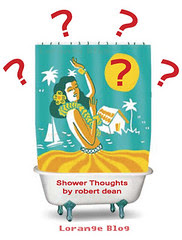 Shower Thoughts is a collection of random memories that come to visit between the turn of faucets and the pull of the curtain.

There is no Coney Island ferry.

I thought of the summer of 79 walking along the Coney Island stands in summer shorts and knee high tube socks. We had the summer months to explore my dad's stomping grounds, visit statues, visit museums, ride the yellow cabs, the Staten Island ferry and visit cousins that magically appeared into my 7 year world.

As I ate my hot dog hanging off the tail of my right arm, the left grasped onto my dads leading the pack of us towards an oyster bar. I'm sure they served other fishy things but blue letters spelled out OYSTER with with a double stroke white outline. A ketchup and mustard only dog was fine for me.

“Just ketchup, just mustard.” I had whispered into my dad's ear.
The man at one of the shiny carts pulled out in a gush steam a dog and placed into the open paper square with a quick slab of ketchup, a dashing slice of mustard before my dad had finished reciting my words.

“Just ketchup,?” the shiny cart man joyously yelled, “Just mustard?” He gave my dad a look of you deprive your kids of true happiness.

May dad shrugged and asked if I would consider something different being in New York and all.

Behind the stack row of soda cans the man prodded me. “How about some onions? How about some sauerkraut?” Each time a threatening spoonful hung about the dog.

My disgusted look amused him.

“You don't know what you're missing.”

My dad finished up the order and with the money offered up his intent to make me try some oysters later on. The man barely chuckled as two dogs were already on their way to the next customer.

Walking away from the aromatic steam and toasted paper wrapped bun [it really was the best hotdog ever] I had my dad explain how you ate an oyster without eating the pearl.


Looking around the the tar walkway as my folks slid oysters down their throats I took in what now I remember mostly as a run down strip mall on the beach. I wondered where these folks lived; in the skyscrapers, in the red brick stacks of grandma's where the kids double dutch scotch and the old men played chess among the bubbled cement playgrounds and tiled walls. Or where they from up the Hudson in Poughkeepsie where Dad would leave us on a street with a cousin to show us around later that night?

We had taken the train up only be left out with a teenage cousin who looked a little put off by this babysitting. I followed my Dad's path until he disappear into an eight floor complex near the train station. My sister jumped over the cracks on the brick sidewalks as we decided to head towards the Hudson to watch the ships pass by. Mostly we skipped rocks and watched a tugboat moored nearby rise up with the tide and sink with the closing daylight.

After a hour my cousin went to bring my dad back down to his family; I wanted to tell him about the tugboat with the green trim and tires stuck to it before it was too dark. they cam back with cigarettes in their mouths.

My dad was chain smoking as he spoked to my mom, telling me to wait to show him the boat. Finally he informs us that there were some more new family to meet; More cousins and some more aunts. “You mean like Ti Ida?” I remember asking and the group answered in equally confusing manners, correcting each other and adding more until the story was agreeable by all.

After the strange looks and awkward chit chat over dinner it was decided that we'd stay the night instead of getting a hotel, against my mom's whispered protest to Dad. Makeshift bedding was placed together for us kids and cousins and a few kids down the hall tossed in because the attraction of visitors from California was too irresistible.

Settling down in the borrowed sleeping bag slash comforter hybrid bed my thoughts were racing. The train ride, the accents, the people, the darkness, the tug boat bobbing in the passing wakes of barges bigger than I ever seen before, the faces of the crowds, the cousins.

Deep sleep came to my sunken eyes. The ferry found me drifting the neighborhoods, skimming down the Hudson to Coney Island . I was the captain.
And I sailed like the ferry, like a train on the sea.