April 04, 2005
Survival Research Laboratories latest creations were going at it behind Dangereous Curve in downtown LA this last Saturday. Basically SRL builds these giant mechanical machines that fight each other until there is one large burning mess. This is from their site:

Survival Research Laboratories was conceived of and founded by Mark Pauline in November 1978. Since its inception SRL has operated as an organization of creative technicians dedicated to re-directing the techniques, tools, and tenets of industry, science, and the military away from their typical manifestations in practicality, product or warfare. Since 1979, SRL has staged over 45 mechanized presentations in the United States and Europe. Each performance consists of a unique set of ritualized interactions between machines, robots, and special effects devices, employed in developing themes of socio-political satire. Humans are present only as audience or operators.

There was a large 20 foot shockwave cannon that they would aim at the crowd, a 15 foot tall trojan horse with this mechanical guy hanging out the back, a giant (4 ft high/8 ft long) spider thing, these mechanical leg less bodies that crawled around with blow torches as hands. Crazy stuff.

Laughing Squid has all the photos of the set-up and show.

Even with ear plugs it was extremely loud with my fellow audience members plugging our ears. I was stuck behind this one 6' 5" parka wearing dude which blocked the first ten minutes, but would duck down when the shockwave cannon was aimed toward us. He eventually bailed leaving a clear view until the LAFD showed up.

See big parka guy? I'm slightly taller than the blond in the middle 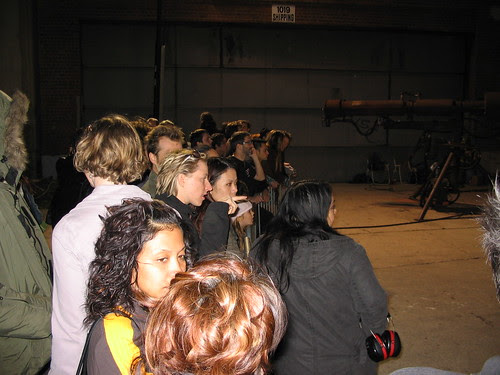