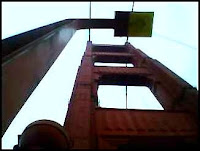 I tried sleeping in this morning past the alarm, blankets weaved between my legs like blankets should be. I'd rather have my girlfriend's legs to wrap around mine and maybe this is why I'm up at one a.m. grilling chicken. Avoiding sleep again; listening to Jdob's voice sing those songs I love and missed this weekend.

Instead of being at her show Saturday I was on Hollywood Blvd at Tiny's k.o. having drinks and eating birthday cake of a friend barely an hour after completing the long drive from the Bay Area.

Well worth the fun trip though: 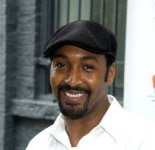 Rolled into the Bay Area around 4 A.M. Thursday morning to a fog topped Altamont Pass along with other early morning commuters from the central valley. Crashed on my mom's couch (I let S+J take the spare bedroom) for just enough sleep to drive safely into Oakland (on the Berkeley border) the next day to a little vegan pizza place on Shattuck called Pizza Plaza. Pretty tasty and, this is random, the owner looks a lot like Jesse Martin, or at least a younger relative of. Well that's more weird than random.

I'd be lying if I said I wasn't two timing my lunch with thoughts of Zachary's, Fat Slice or heck even Blondie's pizza just mere miles away but I was with friends that meant a little more than that. 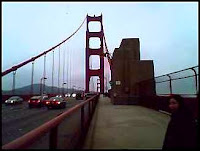 Jumped through The City to the Golden Gate Bridge for our next leg of the day-trip. As a native to these parts I have taken many guest here but this was the first time any of us actually walked the damn thing. Mid-span we took a break to watch helicopters fly underneath the bridge, over the oil slick from the ship that hit the Bay Bridge causing a lovely oil spill the day before and back again.

What else? Lombard St, Coit Tower, half price at SF MOMA, dinner at Herbivore, ice cream at Maggie Mudds, and lastly a panoramic night view from atop Twin Peaks. This stop was also my first use the Decaux public sex booth pay toilets that are sloooowly coming to Los Angeles (article / photos).

Now the SF ones have been there for a few years, free to the public in high touristy spots, and it became obvious to us that they quickly separate the evolved from the retarded. How it works is simple: Press button to open door - use bathroom - door closes after you leave and structure self cleans - repeat. On two occasions we witnessed the later group try to interact with this simple concept of the self cleaning restroom and fail. 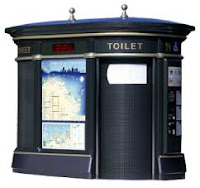 First was the drunk lady we first spotted dancing in the parking lot besides a music pumping sedan that would not wait for S to fully exit before barging in fully ignoring our warnings that she was going to be locked in and showered with high pressure nozzles. Sadly we we were wrong.

Second was the douche bag who threatened J with a totally BS remark of possibly having a gun when he was inside and then said some additional crap to J outside as he too explain the self cleaning concept to the lame ass. As we drove off we just had to roll down the window and yell at him for being such a retard: The douche had his arm blocking the door from closing so his skanky girlfriend cloud make use of the facilities without being hosed down with the magic bubble action J warned them about. All he could do is yell back some bad words and flip us off with his one free hand.

And we laughed all the way down the hill about that.
the end.