one more place taken off my list to visit

July 20, 2009
Thanks to the two folks sleeping on my couch last week I was able to experience my first show at the Hollywood Bowl on Thursday. The scheduled event Bravo Beethoven! with the LA Philharmonic which was the perfect remedy to a crazy, stressful week with new bosses and corporate drama. 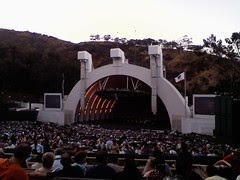 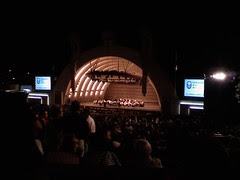 After LA.Metblogs post about proper bowl etiquette I kept an watchful eye on the audience looking of people texting and being inconsiderate. Only spotted a couple glowing screens on the lower levels but a few rows back were the most obnoxious Germans unfortunately. During the Egmont Overture they yapped, shared a camera to flip through pictures, and with the beep beep of a text could be made over the music. Despite numerous death glares it wasn't until a couple moved a few rows away from them was the hint was finally understood.

Anyhow this was the last night our friends would be around before heading out to the Midwest and annoying audience members couldn't dampen my relaxed mood. Great friends, great music, a great venue made it an perfect evening in Hollywood.