Last Friday a couple of weeks ago I won tickets to one of may favorite bands Los Campesinos through the generosity of LA metblogs. I had entered the ticket giveaway which asked for a link to my favorite picture of Wales where the band hailed from and the location of the image. A quick google image search led to many boring, non-specific to any part of Wales pictures so I went with the one subject I knew of in Wales in my comment: 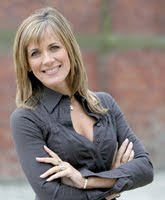 The only thing I can think of Wales related is Carol Smillie, the original host of Changing Rooms on BBC America (aka Trading Spaces in the US). She was way cute.

I assume that this is not going to win me any Los Campesinos! tickets.

Later that day the one and only Lucinda sent over a silly email informing me that I merely won because there were only two entries (including mine) and two prizes so that's an automatic win for me!

So I took Corey of course and spent the whole time outside during the opening bands catching up. I should do more often - I miss Corey. [sad face]. A little note if you want to meet the up and coming, headlining band:  if they're smokers like half of Los Campesinos! are, they usally smoke out front with the crowd who wouldn't normally recognize them this early in the band's career.

The show was very good and became seriously great with the last few songs when the singer jumped into the crowd and people were dancing/jumping/singing along. The raise in energy was quite noticeable and that's always a great way to end the night.

Check out on of my favorites songs "Death To Los Campesinos!"