A couple blocks down the Strip, Overnight Lows will be at the Viper Room
with The Nymphs and The Penfifteen Club (a great rock band) 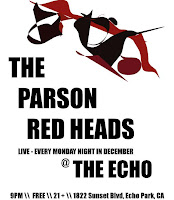 The Parson Red Heads kick off their monthly residency at the Echo tonight with Nico Stai, the Black Pine, and Faraway Places.

I skipped out on Los Abandoned last week and instead headed out to 3 Clubs to catch this group. Others have written about them here and also here on Metroblogging LA so the only thing I'll add is that I thought them cool while my friend Corey said they started off sounding like Tom Petty and Pavement.

We also agreed that girls drummers rock and The Parson Red Heads have one of those too.

They are normally a five member band but there were six on Thursday and apparently even up to eight members at shows earlier this year. On myspace today they noted that it will be a 12 piece for tonight.

My goal is to hit all three tonight but I seriously doubt it will happen.
The Parson Red Heads