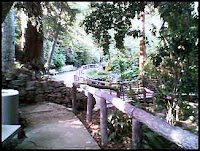 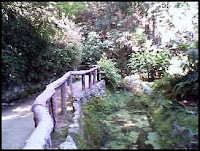 I've been playing this game of catch up for the last two weeks at work so I'll give you twenty minutes like Tony says. More stuff coming later

My big plans this weekend was to visit the Fern Dell section of Griffith Park located right at the elbow of Western Avenue and Los Feliz Blvd. Wacky Huell Howser did a segment on it a few weeks ago on PBS and me and Huell are of the same breed of dork with overly excitable childlike enjoyment at funky places to visit so this place was a must do.

First It didn't hurt that the trail is maybe a half mile long for my out of shape ass and could also be easily managed by my gimpy friend that I invited to tag along with me. Secondly I also teased her with the possibility of vegan pie at the The Trails Cafe /snack shack at the end of the dell. This was our carrot. 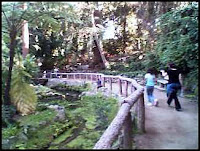 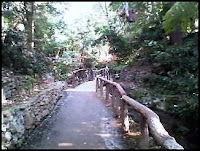 We parked at the lower end and started walking up the trail that hugged the side of small stream that ran about ten feet below the roadway. According to this 3rd & Fairfax post the dell was created to take advantage of water released as a byproduct of the Observatory's cooling system so besides the planting of numerous ferns species, every little turn and waterfall is completely man made for your enjoyment. Even the rustic handrails on closer inspection are just concrete molded to look like some logs were cut down and and bolted together.

What I loved about it was that there were plenty of benches to sit and listen to the water tricle by. I think this would be a great place for a romantic stroll or just plant yourself with a book for a couple hours. In some ways with the few redwoods growing there (not a common tree down here) it felt a like a little slice of the trails I've walked up in the Bay Area.

When we made it to the Trails Cafe they were out of anything vegan (we were told that it depends on the baker of that day) so we decided to leave and hit Scoops again for another gelato fix. Now I was just there on Friday and alright with a couple more servings but somehow I managed to have five on Saturday because it was getting "too cold to eat ice cream" for my group (wimps) and well, I have a problem saying no to leftovers.