Feel sorry for me. I've been sick for a few days now. ok don't. ok do.

I had to leave work early Wednesday not so I could crawl into bed wishing for nyquil dreams but to make a last minute recital in Mission Viejo by 6:30. Nothing like rushing home to shower then down the Golden State in sold traffic for nearly two hours. Worth every minute of it even though it last barely over a half hour.

With time to kill before the Deep Sea Diver show in Fullerton I stopped for dinner ala drive-thru and had Caribbean phone calls in a target parking lot yet as I got to the Plush Lounge the bands were running late so now I ordered up a beer so I could kickback and get some writing done. This is when I crossed paths with Jessica who informed me that it would be just her playing solo eventually that night.

We chatted for a few minutes and I'm just going to note a part of the conversation here where she mentioned picking up little side jobs recently and as she took a breath between the the end of those words and the start of her list I just had to insert "like mowing lawns?" but thankfully I don't believe she heard me and continued on being her charming self.

The second band Dietra Krushev was described in the same vein of the band Clinic and they were interesting enough to move away every few minutes from the outline I was working to watch. Good music to write to. Jessica came up next and went through songs off the forthcoming ep and after reminiscing about the defunct Hub she pulled out a margo lee demo that I'm not sure if I ever heard played live. After hearing her songs over the years go from a rough solo demo to a polished recording I love how she translates it back again. As a few folks listened with their eyes closed I'm always fascinated by the great tones she pulls out from her guitar. These highly confident solo sets for me are always le wow. 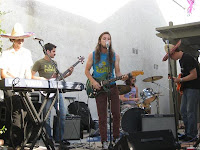 After standing for the last hour I was feeling a little tired/sick (the beer was a bad idea) and didn't stay for Fun Tree who looked like they could've been a lot of fun to watch. Instead said my goodbyes but looking back now pretty sure I wasn't really making sense (as if I ever do) but I left smiling nonetheless.