I'm going to attempt to eat this tomorrow

Yes that would be an OkiDog: two hot dogs + chili + cheese + mustard + bacon + all wrapped in tortilla love.

This gastronomical time bomb will be consumed on the great Hot Dog Death March which involves starting at Pinks (3pm), heading over to OkiDog (4.30ish), and finishing off at Scoobys (@6.30). There will be hats, shirts and prizes given away via trivia questions. Ok it's more like Death Driving than Marching, but whatevs.

I'm aiming to make it through to taste my first oki dog at least ::Crosses fingers, pats roll of TUMS in pocket::  but only if:

- I can get the rest of my gang to leave the house and overcome their fear of eating one too many hot dogs.

- And I can get through the "Martha Stewart" at Pinks first. (hot dog +
Sauerkraut + sour cream + tomatoes + bacon = yum) 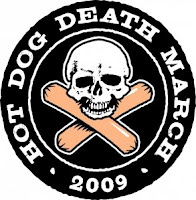 You can keep up with the HDDM though the site or via their hot, meaty tweets on twitter.