Thanks to the Dollyrots for putting out an open guest list for last night's show saving me ten bucks. Quickly parked right off Santa Monica Blvd on Larrabee knowing that in the time spent driving around the Viper Room in a big circle looking for metered parking, I could park for free and walk to the venue. I huffed it up the street at full speed, petering out two thirds of the way up. Knew I was going to miss the Waking Hours and having a heart attack wasn't going to get me there any faster.

The doorman made me wait even though there wasn't a line, possibly because he saw the look of death on my face from that hike and did me a favor by doing so. Labored up the stairs and planted myself against the pole nearest the exit door waiting to see if Corey would make it out. Julia remarked later that I looked gloomy that night which I was without anyone to talk to alter my dead can dance look on my face. I did know some folks there from KorK, just none well enough to chat to.

I was already dead tired and feeling a little I dislike the holidays blah until Emily came up to say a quick hello before leaving. A smile I needed after being slightly snubbed a few minutes earlier by someone else. A few weeks ago it was very much direct eye contact, a pause in your tracks greeting but not tonight. Once there were sparks a year ago, now just friendly hellos every few months (as it should be). To this day I wonder if I just imagined those moments in the first place.

Talked outside with a friend that I've gotten to know a little better over the last month. Her story beat my meeting the Ex's boyfriend talrury before the Dollys played until the cigerette was out and the band already on their second song. Set seemed flat at first, picking up half way about the time they played the new-ish song Leaving LA, my new favorite. Joined most of the dollycrowd by leaving before Vagenius played, a band I enjoyed months ago but couldn't compete with an incredible urge to crawl into bed.

Driving down La Cienaga I spotted a McDonalds offering one dollar Big Macs on Mondays. The naughtiness of unhealthy fast food can cheer me sometimes so I had to stop for a quick pick me up snack.

Hello dollar Big Macs! I want two of you but the detached voice informed me of the disappearance of the Big Mac sauce. Fine. Whatever. Give me those big boys with mayo then.

Looking across the street as I ate my less than fabulous Big Macs I noticed the Bikram Yoga World Headquarters that my old friend is really into. If it wasn't for the taking your shirt off in a large room of strangers, I might be interested in trying this out.

Look at this picture below. I so could do that. All day. 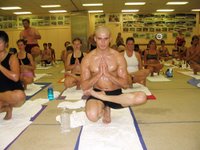 I found a good intro article here if you're interested.