July 25, 2007
I just remembered this little rumor from my recent Bay Area trip and thought I'd share it.

Earlier I posted about my future Vegas trip in late August for my Brother's 40th birthday and how many relatives where flying out for the event. Sadly one was unable to take leave from their military job for a couple reasons, one being that they might be needed if someone politically important dies that week. 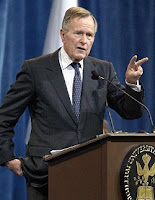 Word is that he is being treated for something back East currently and is expected to be no longer of this mortal world in the next month or two.

[my opinion ahead]
While his ::administration:: was less evil then the current one, they still did invade Iraq first (though props for not occupying) , allowed the ultra conservative right gain more of a foothold after Reagan that enable the current administration to be elected, and a personal affront to me, ignored the AIDS epidemic nearly completely. what kind of administration hurts their own people like that? Oh wait any one run by a Bush.
[/end opinion]


(In all seriousness I do wish the Bush family my best through this alleged time of sickness. My dad passed away when I was 17 - dead/dying dads are not fun.)
George H Bush Sr. Death Watch 2007