February 03, 2005
So I'm at The Derby last night which is a really cool place..great dome ceiling, with great booths. I can now check it off the "Places I still haven't been to yet, even though I've lived in LA for 8 years list". If you don't know already, it was featured in the the movie Swingers which you should rent if you haven't seen it.

Anyhow, I'm chatting away with Corey and Cortney at the bar when this girl comes up to me and said " Luke?" This is odd because girls NEVER come up to me and my name is not Luke of course... I don't think I even look like a Luke. So I'm like "I'm sorry what?" and she says "oh are you Luke?..oh you look like my friend Luke" and I thought if I was her friend, wouldn't she know my name and what I look like? Afterwards I told Corey and Cortney that I wanted to be introduced to people as Luke, 'cause I'm lame like that and find it amusing. Luke also sounds like someone who would be totally different than me. Corey asked if she thought I was gay...I think he was making fun of my new shiny shirt. (FYI: I grew up with most people thinking I was gay only because my best friend was openly gay since Jr. high and I had girlfriends that went to different high schools so people assumed this. I could really care less then and now what people think and it wasn't that big of a deal to most people since it was the Bay Area)

Dan and I chatted briefly with Le Frost from 8 Bit and even though I've meet her before a few times, she had no idea who I was. oh well. She apologized and said that half the time she's either way drunk and/or stoned and that happens alot. Should've have told her my name was Luke..but I chickened out.

Oh Tuesday was Kiss or Kill with Bang Sugar Bang, the Sharp Ease (I liked them, but I see room to grow into a more defined sound..imho) and Billion Stars. I don't know why I never stuck around to see them play more often..they're Tony the tiger grrreat. Megan (randies) and Cortney showed pretty drunk from Megan's surprised b-day party. Wished her a happy 21st birthday even though she is tad older than that. 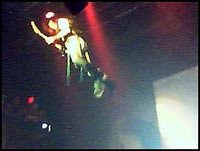