February 22, 2006
I haven’t gone out much this week, and responding to email and phone calls hasn’t been on top of my list of things to do. Some days are just like for me without even attempting to be anti-social. Let me quickly say sorry to my friends if I’ve been more lame than usual. It happens often.

There are some thoughts floating around in this head that I’m not going to talk about so let’s make some stuff up here for fun instead. 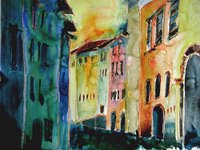 I could not help but watch DG as she flirted between street and sidewalk.

I feel like I should be apologizing for this, but some nights, the length of time since I’ve seen her, my state of mind….oh that damn swooning. So much for it being “verboten.”

Walking back into the room, I pass behind the two guys talking to her and I make zero attempt of stopping my eye contact. She holds my gaze the whole time between framed coated shoulders of her friends, probably thinking me a freak, but fine whatever it’s not that she doesn’t know already.

Later said a proper hello to her and came this close (use your imagination) of telling her how great she looked that night and it wasn’t going to be a simple compliment. Because I fancy myself bold at times I'll say such a thing to make the greatest impression until I realized half way through that I don't have anything to follow it up with. Years ago I once I stopped mid-sentence while talking to a group of friends (@ eight of us) at dinner, turning to the friend of a friend and remarking on how she had the most beautiful eyes I’ve ever seen then continued on with my sentence. It was a distraction that I needed to address and I pretty much floored it without waiting for a possible negative reaction.

Where was I? Oh yeah, so this close (use your imagination again) from saying:

Can I tell you something?
Don’t take this the wrong way or anything, but I wanted to tell you that you look absolutely beautiful tonight.
Well, I mean you look beautiful everyday.
Um. Yeah, I think. I think I’m going to stop talking now.

30 miles at 3 am,
I have this repeating in my mind on the drive home.
The next morning I'm slightly disappointed that it’s still there.
DG