Monday night plans were to catch the Randies and Porterville at ye ole Viper Room, both bands playing great sets imo of course.


Show:
I've talked a lot about the Randies before, so I'm just going to say that with a new drummer and especially the addition of Laurita (ex Angoras, Relish) they are a different beast worth checking out again. Porterville was a blast for me until some girl told me either you're dancing or bopping your head, you can't do both. I rolled my eyes at her and shruged as I stood trying not to die after jumping around for one song, my head bopping to a soon to implode heart. I'm old, cut me some slack. 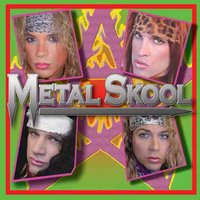 Johnny 99 (KorK co-founder and all around nice guy) walked us into Metal Skool up at the Key Club. I wasn’t sure what to expect, but wide awake and completely sober I was pretty much for anything including heavy metal at this point. My older brother got me into early Metallica so I can appreciate the metal bands of the 80s but as soon as the hair got bigger, the more of a joke these bands became to me. I was thinking the place would be full of greasy, jean jacket clad stoners because those were the kind of people I used bum cigarettes from behind wood shop or heavily made up guys in Tina Turner wigs and spandex. Those ere the guys who offer their services to me walking down the street.

The reality was that Metal Skool ( billed as "The best imitators of the best music in the history of music, 80s Metal!") was one the most entertaining shows I've seen in a long time [Cortney, you'd love it].

The Key Club was over capacity, some MLB players were hanging on the right, Drew Carey and Tommy Lee were on the left raiser and the band rocked a surprising clean cut crowd. The big hair belonged solely to the band, the girls were mostly hot and not too whorey (which might mean average hot to some of you), and only a few guys with bandanas covering their heads milled around.

Every Monday this band does a tongue in check celebration of 80s rock, with funny banter, stupid made up songs about screwing girls, great rock/metal covers, and they even had a five minute guitar solo over the crowd.
That rocks.

I would put it in the visit once or twice a year category, if you’re still stuck in the 80s and need to relive your glory years.
That’s sad.