Vegas is in my pants

Calling in sick to work used to mean I was in Vegas rolling around with a beautiful girl on dated, synthetic fiber comforters at the Flamingo. Poor girl wanted to dance, dance, dance and I countered with tales of adventure at the Star Trek Experience.

Our common ground held cheap drinks and nickel slots from which I would mimic the artificial coin drop sounds and Texas Tea oil well strikes to her amusement. I introduced her to her first 7.99 lobster and steak dinner at 3am, ensured the required viewing of the Bellagio waterworks, ended the night with kisses and laughter among the perfectly lit banks of Slingo.

Vegas is in my pants and I don't know what I mean by that. She swore that the Chop Suey Chinese Kitchen Fortune Cookie slot was her game. It loved her, it was going to make her feel all warm and happy inside. I feel the same about the godfather, the seven and seven, the crackwhore and Adios MF I consumed last night in under two hours, it wasn't love (will I even want it if I find it?), but warm and happy inside I was. 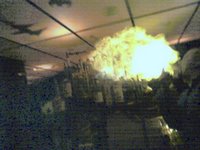 Calling in sick means we never saw Get Set Go or New Maximum Donkey at Mr T's Bowl, instead finding the Little Cave empty save for Sir Ian Dangerous, the other bartender Bobby and Chris P. Not sure if Ian does this on his nights at Saint and Sinners, but they were..flame throwing, flame spitting (I'm drawing a blank of the right term), and it was cool to watch the alcohol residue burn off the back wall, the ceiling panels and among the rows of bottles. Fire, cheap, stiff drinks and anytime late night dinner at Fred 62, it was a rainy Highland Park Monday night in my pants and how hot is that?

What does it mean after a strange four days of alcohol confessions that actually contain more than ever mentioned here, sober to 5am house party visits, couches and empty patio raindrop kisses against a brick wall, and I'm still exactly where I was Friday morning?

I'm calling in sick today, that's what it means.

Calling in sick means that I'm on my syrupy laptop on a peanut butter connection, so I can't watch the new Man in Gray video of "thirty-six"

Today is the day the electrician will show up, force my clocks to be reset and I will finally be able to bake a friggin' pie.