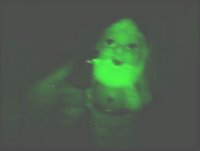 Yes I made it to work by six this morning. In fact I was here at 5.30 so why not start writing stuff. Whatever stuff.

After the show [ this one at Highland Grounds] I was explaining to friends how much fun I had watching the music by Mike Schnee, the spoken word parts by Becky something and Krista something and the wonderful Rob Z as I stood against the wall. The tables were already full groups of friends and couples finishing their dinners and though alone I felt that this is was a perfect valentines outing. This is the type of deal I would do on Valentines with someone if there was a someone, but I think it came out sounding lonelier than I meant. 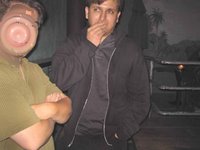 Random stuff because I’m not quite awake:

Like a picture of me on the right --- >
I hate pictures of me. This one didn't break the camera so I'll post it.

No food, no drinks, but a cigarette enjoyed a little too much while looking into brown eyes.

Thought I would make introductions and then realized how stupid that would be.

Related: I used to have a better sense of people, but since whiskey girl (an insignificant thing) I have doubted my spider senses. Possibility of being way off base: Quite real.

I hope most of you survived your evening alone, with your love, with the Ex, or just among friends. It was a beautiful day in Los Angeles and what could’ve been better than that?

Nothing except a flash mob pillow fight!