Sat or El Cid or something 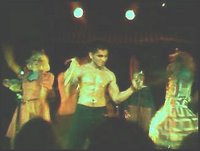 Coughs, bad parking options and two hours of Arrested Development won over Kiss or Kill at the sterile Spaceland. A nice venue if you're seeing one or two bands, but horrible for socializing (kork is a scene for better or worse) with the only the smoking room as an escape from the bands. I get a little claustrophobic when it’s packed in there and since I no longer smoke it has little appeal for me. This might be just a rumor, but I heard that place will dry out your ovaries like beef jerky.

The rest that night helped enough on Saturday to catch Sounds of Asteroth and the Makeout Bandits at El Cid, a venue that still is primarily used since the 60s as a live flamenco dinner theatre Thursdays through Sundays. I love El Cid from its uneven switchback stairs, large multilevel patio, wooden floors, and for being twice as old as what is normally consider old in Los Angeles.

From the kmg site

El Cid was built in 1900 by D.W. Griffith. He modeled this venue after a 16th century Spanish Opera House. He filmed "Birth of a Nation", the first "talkie" movie here. This is a charming oasis in the city. There is a courtyard that makes you feel as though you're in New Orleans. El Cid serves topas as well as the finest Spanish food in the city. There is a beautiful stage, wooden dance floor and beautiful red booths

Sunday I ate half of a large pizza for dinner and had the most crazy crackhead dreams because of it.