well a lot of nothing actually 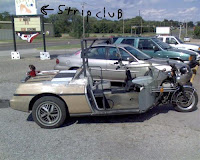 I have nothing to say.

Friday I laid wrecked on the couch, then on the bed among three pillows until Saturday morning. Sleep escaped me again. This last weekend I forced myself out to The Habit in Glendale with Corey followed by some serious Monkey Ball boxing matches until midnight. That would be a total of two hours of air for the whole weekend eating around strangers who clapped at invisible objects or trucks awkwardly parked in handicap zones illegally. Enjoyable but strange.

That's all I've done. well I did want to call you but I didn't. I cleaned. I wrote half sentences on ATM receipts. I did want to stop by the baby shower but I didn't. Scratch the laundry. Scratch Trader Joes. I shredded a bunch of papers documenting past actions of past mistakes.

So what's getting me down? Well nothing. Well I do have to figure out how much of a car I can afford this week. Well I do have to buy a car in the next day or two. All I need is it to be small, at least two wheels good and economical. Cheap helps. Laughter helps. Sex helps or love or whatever. I could care less about how cool I'm suppose to be or that valets will laugh at me...just small with a cd player and air conditioning. Simple parameters that I've established for myself since my move away from my past. Once I lived (mostly) alone in a four bedroom house. Once I had a loaded Pathfinder - then a cheaper jetta, then a cheaper mitsubishi. Not to be such a George Banks but I do want the cheaper chicken and only need eight buns and not twelve.

I think I'm going to get a Yaris if not a used something and somehow change the Y to a T and squeeze the letter D in the name. Sure I would rather have a mini cooper or actually this instead and one day I will.

I don't want to be here now and that could be taken care with a tardis (the T and D answer for you non Dr Who nerds). Not wanting another car payment is what really keeps me up, but what can I do? Well I'm going to win the lottery. Oh I forgot about that.

why is money so important to some people?