How was your holiday?

You didn't ask so let me tell you: Gained a couple pounds and my hair did this weird thing this weekend where it would tweak out in unattractive ways. As I get older I've noticed that my hair does some very frustrating things: First it starts growing in weird places and in bushier amounts - Already have thick enough eyebrows thank you very much. Secondly I have to settle with the slow migration off the top of my head to my eyebrows then, I presume, a nice retirement home in Florida with a high bocce court to resident ratio.

So this holiday my bad, tweaking thin hair and I ate out too much in between little trips in lovely LA. Saturday I went over to Hancock Park in the afternoon and took advantage of the LACMA free after 5pm bargain admission. My company and I were LACMA newbies so we wandered around haphazardly from hall to hall to get a good overview of the mid-reconstruction layout. Definetly going back so I can take my time and I also want to see the current Dan Flavin retrospective again as seen in the picture above.

Sunday we headed out to Venice Beach as the cars drove east at five pm I drove west to my favorite parking spot off Rose. Kept it simple with a towel and a pizza picnic with the drum circle as our wave added soundtrack behind us. Where the high tide mark dropped down sat a an assortment of couples, tourists, single parents and your plods of black hoodie mohawked kids waiting for the sun to set despite the clouds or slipping off their shoes to contemplate their dreams, their demons, their inner voice that told them to ignore the cold surf barefoot bathing and the bubbles of air from the wet, packed sand. *

I saw more of this than anything else. I saw myself doing this (post 1, post 2) awhile ago. This time was better - This time I had pizza. 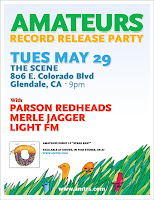 I haven't seen the amateurs play in over a year 2 years ago. wow time flies. This was back when MFR was roommates with M and Keith the singer so guess that seems about right. Nice folks. Happy to see that they finished an album and all the cooler blogs mentioning this show. Also Parson Red Heads and Merle Jagger are great bands too.


*maybe this was just me over thinking again...and writing out of my ass