May 18, 2007
Ok I get the good words about Force Field On I read yesterday afternoon.

Good stuff even for what seem like an overly long set - this is only mentioned because I had hope that like *some* of other Prospector shows I've seen over the last couple years this one would start on time; my secret plan was to see The Happy Hollows, sneak out to Alex's Bar for Deep Sea Diver, make it back for New Fidelity, sacrificing the Soft Hands set which I can tell you was great since none of this panned out.

So much for the imaginary world where I get everything I desire. 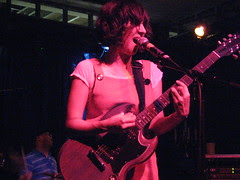 No reality wasn't that bad: I wore the wrong color pants and continue this weeks hefeweizen drinking spree to good music. Added benefit of listening in (they were yelling over the music) to the conversation next to me.

Next break while the Happy Hollows dealt with sound issues
GWPS: Wow.
Friend: I f..ing love them. They're so raw.
GWPS: What?
Friend They're so raw!
Gwps: yeah.

The Happy Hollows switch out the Bass.

This continues for a couple minutes since they were a bit drunk and then followed by more gushing about the band. The sound got better and the singer starting her bouncy electrified guitar playing and I look over to these guys connecting to the band on stage. Each time they chatted I wanted to turn and say "Yes! Exactly!"

Because you know that wouldn't be weird or anything.