I tend to miss things 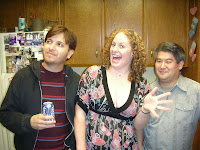 The worst thing that happen to me between Thanksgiving and New Years was that this girl left for Vet School. At least I had a near proper goodbye before she left and even a decent picture was taken at her going away party (by Kevin of Midway).

As long as I don't look directly into the camera I can avoid causing a horrific chain reaction of events starting with blindness, infertility and nuclear core meltdowns. Yeah that's my favorite Target sweater and I do look that tired all the time; so basically I look like shit.

So lets see, in the two weeks off from work we got the three deaths out of the way, I finished off a couple books, went up to the Bay, went to the beach, but mostly spent a whole lot of time in my apartment doing a whole lot of nothing.

The first book finished was If On A Winter's Night A Traveler. I liked this strange book (part of books?); If you don't like the use of flashbacks, you won't like this one even though flashbacks aren't use at all. Let's just say it's very non linear...if I'm using that term correctly.

Book two was Chuck Klosterman IV: A Decade of Curious People and Dangerous Ideas, which was a nice quick read. What tripped me out in this book was a little mention of Radiohead opening for REM way back in 1995 for REM's Monster tour.

I went to that show.
I had third row, center left aisle seats.

And I don't remember seeing Radiohead at all that night!!


Then again I don't remember seeing Pearl Jam in that same venue a few years earlier. That was way early on when the general consensus was that we (my friends) liked them better when they were called Nirvana.

I believe I was in line for nachos.