I want to go to Vegas

January 18, 2007
Boy I needed to recover after posting such a hilarious post on Tuesday. Ouch I hurt still.

Um more like working consecutive 10hour days wore me out enough so that I missed my two favorite bands, New Maximum Donkey and Midway on Tuesday night. Did catch the Submarines at the Echo on Monday but that's it for the week so far.

Tonight I'll make up with it a Los Abandoned set at Amobea at 7 sharp. If I'm up for a drive there is a good line up at the Detroit Bar with Philistine!, Venus Infers, and The Randies...not Monsters are Waiting as originally listed. Speaking of which they (MAW) announced a Safari Sams show with Stellastarr* the night before their Troubadour date - and its cheaper too ($10).

I've been thinking about hitting people for a ride to Punk Rock Bowling in Vegas this weekend, but the Black Fag / Me First and the Gimme Gimmes show is on Sunday night and I do have to show up at some point for work on Monday. Joe and Flaco from Pu$$y-Cow are going to be Black Fag's back up dancers and guitarist 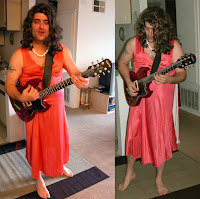 that night and allegedly The Randies are playing shows in that area too but who knows if any of this will pan out.

My other choice is to stay around for Midway at the Scene on Friday, have my car's alignment corrected and get a haircut and I really do need a haircut.