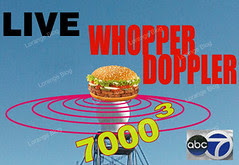 January 16, 2007 - Only one day after Los Angeles ABC affiliate KABC announced "LIVE MEGA DOPPLER 7000 HD," an upgrade of weather forecasting hyperbole never before seen in a city already know for over-hyping brushfires to near apocalyptic proportions, the next donkey punch to KCBS, KCAL, and KNBC has been leaked out to the blogsphere.

LIVE WHOPPER DOPPLER 7000 TO THE THIRD POWER is the new collaboration between national fast food chain Burger King and KABC. Not content with the over population of McDonalds and Western Regional heavyweight Jack In The Box locations, Burger King felt it needed to be able to turn over drive-thru service faster than the competition by thinking out of the box. By teaming up in this first regional test of Eatery Doppler Technology (EDT), Burger King hopes to predict orders before the customer reaches the menu board saving the company money with reduced mistakes, serving times, and eventually the costs of maintaining up to two boards per location.

KABC feels that this creative cross marketing will reach the largest segment of potential viewers in the Los Angeles Basin that find anchorman Chuck Henry of rival KNBC more endearing than their talent. "Channel 7 is just hoping that any person with a pulse switches over to them," said an inside source who might or might not be me. He continues, "Now with LIVE WHOPPER DOPPLER 7000 TO THE THIRD POWER and that hottie anchor Lisa Hernandez they might actually have a chance."

While an official start date has yet to be announced, it has been confirmed that part of the promotion will include a free LIVE WHOPPER DOPPLER 7000 TO THE THIRD POWER antenna ball with every Burger King meal upgrade.