Tonight The Wombats were indeed better live than their already energetic recordings. I imagine outside photos and reviews will come in a day or two so I'll post links later.

Now it struck me funny how many people I recognize via myspace or blogs in the real world that I momentarily think I know them. 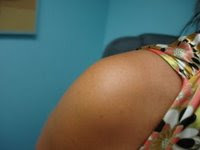 If I didn't know better there was one person I thought could be xTx. I mean I only have pictures like this to go on so it wasn't her, but I think this person would be what I expected her to be like in person for some reason. In that case, xtx you're short.

I left right after the Wombats played for Kiss or Kill and met someone new, a friend of a friend. I'm going to leave it at that for now as I like to keep somethings close to my chest.

Was I at a show this Monday? I lost this weekend somehow - did you see me? If so please remind me of what I did.

Oh yeah, Monday was wasted outside the Key Club for because the AME guest list situation went fubar so some friends went the Rainbow while we hit Los Tacos. I think we made a better choice.

Tuesday I decided to hit Mr T's for 8 bit and the Mormons, walked in during the middle of the Monolators set. It's been years since I've seen them and realized that was a mistake on my part. The Mormons were solid as always (and playing three more Tuesdays there) but I came mostly for 8 Bit as its been a long time and I wondered if they changed much. Well after a period where every show ended in a fire or some kind of drunken mess, this was probably the most professional show I've seen by them ever. First they had a DJ scratching behind them adding an extra layer of sound and secondly they seemed relatively sober (not that wasted) and played a lot off the first and better album. 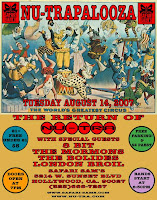 Makes the next show at Safari Sam's on Tuesday an easy recommendation.