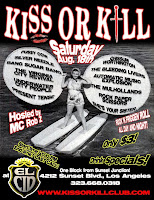 You have your reasons to visit the frying street pan that is Sunset Junction be it the food, the rides, the great bands, or the guys in leather chaps. At some point you're going want to drink regularly priced hard alcohol, enjoy some air conditioning, a real, regularly cleaned bathroom, or maybe listen to some great local bands that you are unfamiliar with.

So for three extra bucks you can get all that above starting at El Cid located between the Bates stage at Fountain and Santa Monica and Sunset, er the actual junction. Oh don't forget the fair is elbow shaped this year, making a turn down Santa Monica.

[Update: Chissum was hurt in a horrible pudding accident so the three bands he plays in will not be performing. At this point bring a harmonica and a plastic bucket and you'll probably get a slot]

[Update 2: King Cheetah and Eject added, BSB removed and please note that El Cid's usual Flamenco Dancers will run sometime between 7-9 who knows if or when]

[Update 3: Just show up. some random bands, air conditioning. whatever.]

[Update 4: as of Friday 5pmSat morning the FINAL lineup.]

Hosted by MC Rob Z, only one of the nicest guys I've ever met.
Also a secret movie star.
Sssh. Watch the Princess Dairies and towards the end look for the pizza delivery scene.