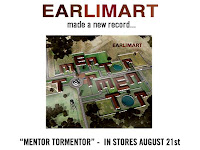 I can't get a lot of things off my mind lately: This heat is sucking us all dry, this Earlimart album playing on repeat, oh and this one girl.

I remember when I first played parts of Earlimart's Treble And Tremble for MFR years ago and while she liked it, the singer sounded just a little too much like Elliot Smith for her. She loved ES as he played near empty rooms, as he played in forms not suited for standing let alone pulling off a show; Anything similar did not ring true to her ears. Playing catch up as aways I later learned that Aaron Espinoza was a close friend of ES, as the well known story goes, and it made sense that intentionally or not Elliot Smith would affect the sounds emitting from that album. For me it was like most things I'm attracted to: it just has to happen in simple terms. I just loved the sound and the way I felt listening to them over and over again.

Tomorrow is the release date for the new album Mentor Tormentor and the second release show at The Jensen Rec Center the Echoplex (now only $7!) with The Pity Party and Parson Red Heads. LAist has a proper album review here if you want to know more.

Contest alert:
MOG is giving away a Trip+ VIP tix for The Treasure Island Music Festival (Sept 15/16) where it will be anything but hot.

TI has always fascinated me.