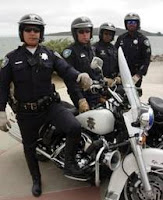 Some of you might not know that my brother is a cop up in the Bay Area city of Richmond. Generally regarded as a "bad part of town" that is on par to say Compton down here in SoCal; mostly working class, with a few bad sections with deep gang roots going back decades. The same sections where in the 80s the postal carriers were required to wear bullet proof vests when on route.

As the city expanded up the hill towards I-80 with new subdivisions, shopping centers, etc that came along with the dot boom, the overall vibe has gotten better but shit still happens in the same small parts of town

As reported yesterday on sfgate:

Richmond police put SWAT teams on the streets today after two more people were shot, bringing the number of shootings in the city since Tuesday to 11.

And this morning: Shot fired at Richmond patrol car

So I call my brother up to tell him not to get shot at or um, at least not to shoot himself again (To be fair, his gun accidentally went off in the station while changing into his uniform in a bathroom stall, as the old station didn't have a locker room or a real stable shelf to put loaded firearms onto). So anyhoogle, catching him at work (he works traffic and doesn't have to deal with the bad stuff anymore) I can hear the other cops asking each other who heard what
and when and I ask how concerned they were.

His answer: "oh this is just a normal day here; right now we're a little more concern as to which Starbucks we're going to grab some coffee and pastries at."