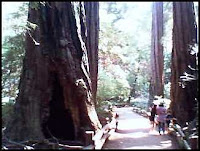 I've traveled over bridges, saw fog roll over into glazed swirls over cinnamon hills and walked between old growth redwoods. I felt the warmth in my face as I spoke words about the rare one.

Been traveling along interstates all month, home to Vegas, Vegas to home, a few days rest then up the 5* for a short week in the Bay.

Friday morning at the Jelly Belly factory: a free 40 minute tour + a hour at the gift shop = leaving 40 dollars lighter. I'm not a big sweets fan but I'm in love with 7-up flavored jelly bellys. 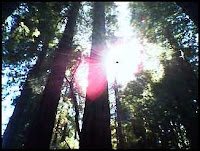 Jumped off to grab some lunch in El Sobrante and thought about an old friend that grew up here. Wondered if I'll ever talk to her again.

Pointed out San Quentin to the first timers in the car, the wind surfers along Sir Francis Drake Blvd, the Larkspur ferry terminal, but kept the memories from 16 years ago inside my pockets along with the hands I use to tell stories.

Stories of carpooling to work the opening of Jurassic Park at the old Festival Cinemas across the street from the ferries. That same old friend shared the bed of a covered pickup, arms around each other from the cold of early bay air; from the chill of our three month silent treatment.

Another year I drove my crazy then girlfriend A. to work in Corte Madera and caught the ferry to waste time in The City across the bay. Somehow I forgot it was gay pride and it took me a minute to figure out how the happiest place on earth was now laid out on Market Street. I followed the parade path up to Montgomery and bought a ice cold can of bud light from a shopping cart hustler, enjoying my third or forth gay pride made only better by crossing paths of chums of my high school years of homeless and rich suburban punks, the skaters that used and sold, the straights and in this case, the interwoven gay youths of central Contra Costa County. 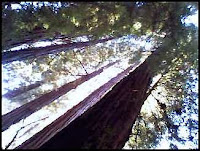 And I reflected upon this on the third bridge inside Muir Woods for the hour watching two inch steelhead swim from behind the reflected mirror of water into the visible shade.

Being so close I couldn't help myself but head North to one last bridge: The Golden Gate. On the western edge I parked and took the walkway underneath the bridge, steel plates above clapping my arrival to the pedestrian side so I could simply say hello again to The City by the Bay.


* B, I'm sure K mentioned that LA folks say The 5, not I-5, but in the Bay we never, never say the The. We spit on LA people for that.
** Ranked 6th most powerful democrat in the country, mentioned as possible VP candidate of Gore.