my mind is clouded...with rainbows 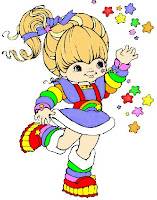 Monday my cell sat on the coffee table wanting to be used. Not even a day has passed and I wanted to spend it talking to the rare one again.

Drove over to write with my friend and waited for the boyfriend to leave sprawled out on the floor, my hands over my eyes as they they cuddled their goodbyes for five minutes. It's cute and I normally tease them for it but resisted the urge. Maybe being a little annoyed is what cause me to close my eyes at first. Maybe I was a little jealous that I couldn't be cuddling with the rare one and being teased for it. In a few weeks I'll get the chance - this thought made me smile.

I still can't wrap my head around that thought.

Mondays have been good in other ways: Last week was a great Katie the Pest show at the Silverlake Lounge that was back to the stripped down drummer + Talia (guitar) set up. A much more effective showing of her material than the somewhat muddled attempt with a bassist and back up singer a few months ago in Long Beach. I'll take it either way but enjoyed this better. I also took one of her vegan cookies that I'd shyed away from at the previous show - my shyness was still apparent when I talked to her and found my old reactions comforting.

With so much going on music wise that night I left to catch The Happy Hollows at the Echo and did so again this week also. Welcomed the sight of large crowds for what I feel is one of the most original bands in LA right now.

Tuesday was spent at another friend's house having punch and vodka under her backyard tree with limbs stretched out in need of a desperate pruning, a nice change from her previous downtown location under the 6th street bridge surrounded by sheet metal and chain linked fences. In between moments of our good talk and drinks, I had a lot of private smiles whenever she left to go fetch something inside. It was a lovely tree spread open like an umbrella that I spent these moments looking up into, tipsy dreaming of the rare one.

In my tipsy dreams she's sliding down rainbows.