The Usual Suspects: The Fuxedos @ Kiss or Kill 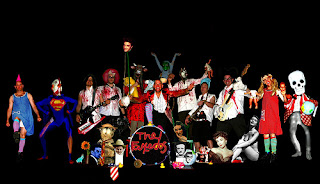 A strange little line up tonight at ye olde Kiss or Kill:

I'll be there early for Paper Thin Walls as they interest me the most out of the bunch and staying for the whole night as always. When I said strange earlier I was talking about the fun and odd Igor Spectre and the downright bizarre slash experimental slash performance art-ish band, The Fuxedos. I was surprised by how much I liked them last time - well worth checking out if you like a bit of WTF in your live music. 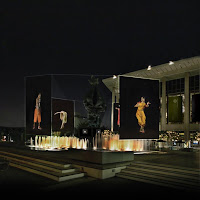 Speaking of arty stuff, may I suggest heading down to The Music Center for the last night of Slow Dancing , a projected art installation around the fountains by David Michalek.

Projected on 16 foot screens, each subject's movement (approximately 5 seconds) was shot on a specially constructed set with a high-speed, high-definition camera recording at 1,000 frames per second. The result is approximately 10-minutes of extreme slow movement-a motion portrait in which the dancer's unique artistic expression and technique are revealed as never before.

Metroblogging.LA has some pictures and info from Monday night. Looks hella cool. Free. Runs from 6pm to midnight so you can do all this in one night.