Went to the somewhat local discount cinema to watch X Men 3 after work mostly to waste time before hitting the early Midway set at Kiss or Kill.

I didn't sweat being twenty minutes late or not seeing the second installment and I hope I don’t ruin it for you but the movie pretty much sucked. It didn't help that tha sound strip was scratched (or was the sensor just dirty?) for the whole movie and some members of the audience had never seen a movie outside of their living room.

On the good side: 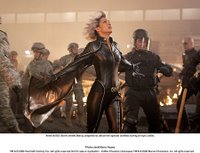 Captain Picard dude had this creepy ass smile before he gets disintegrated. That was neat.

I sighed twice during this movie. First for the sweeping views of the Bay and every time Halle Berry was on. Oh that was way more than two.

Plans were to eat and then meet up with Ashley before heading to Hollywood. Now cells are great tools on meeting up with friends, but are of no use if words describing the actual meeting point are not said. I assemed incorrectly but did get some nice shots of the sear building though.

Friday was also my somewhat successful start at talking to strangers. I'm not even sure why I have such a problem with this; sure sometimes it's the "I think you're cute, but you make me forget my words..." concept that Ash threw out in the comments, but othertimes I'm just looking for that ice breaking reason to say hi. Lacking an introduction from a mutual friend I find myself over thinking it week after week until I simply give up for awhile.

Anyhow got to know some people a little better through conversation and even stopped someone to mention that I saw then driving through Hollywood last week. An excuse to say hi that went well.

You know, things that normal people do everyday.

I'm sure the shared bottles of 7+7 mix at bar car helped the my let's not be strangers project, but the I have to mention how seeing Midway again combined with Porterville seriously owning that place had put me in one of the best moods ever.

Up front and bouncing to the bands like the good old days. (zen & the echo)
Yeah, it was a good night.