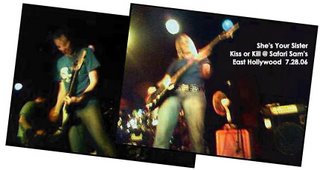 It's the ones with the pretty faces
and cute noses that remind me of cherry tomatoes
small, rounded and sweet.

This has nothing to do with this unpublished draft from last week but with a conversation I had with friend awhile back.

Her tales of cute nose pointed straight into the wind worldly adventures brought a smile to my face and a song to go along with it. That whole perfect timing of song and mood I'd mentioned before.

It happens to me ALL the time.

A couple weeks I was standing up front during Kiss or Kill; not that it was all that exciting on a scene level, more as an eyes closed, music absorption moment that made only me smile. I'm weird like that I guess. 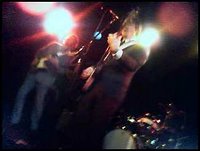 I've been enjoying The New Fidelity since first seeing them back in March 05. They were always good but something about the timing lately has brought more fans to catch up to them and how 'goody' they sound. I among that group of having it just click with me in the last couple months and often find myself stage side for their sets.

As this was their final week of their residency, they brought the whole KorK rock'n'roll circus theme to fruition closing the last song with juggling stilt walkers (and I thought such fun couldn't be combined) and inflated 99 cent beach balls tossed above the crowd.

Hopefully someone took pictures of that.

This night I was working off four hours of sleep, 10 workday and if you've read this blog long enough, four hours of sleep makes me moody. This night was a great mood 90% of the time /I kind of suck mood for the remaining 10% which hit right towards the end as I got tired and hungry.

I found my voice slipping away and I stood staring away into the crowd before the last band. JP noticed and I explained that I just hanging out, feeling stupid. The usual.

"I'm fine. Just annoyed with myself sometimes"
"What did you do?"
[she asked somethng along those lines]
"It's not what I did; it's what I seem to never do. Simple things I find myself regretting not doing sometimes"
"Ah a missed opportunity?”
"As always.”

Back to the Smile

For the second time She's Your Sister cheered the fuck out of me. I can be in a mood and when the last band rolling on stage at 1 am can keep the crowd inside, pull me up front, make me smile then you know they are that good.

Gush, gush, I know, but damn do I enjoy them.

Oh they are playing at BB Kings tonight (Universal City 10pm), which means it's free if you eat dinner but otherwise like a million and ten dollars to get in.
new fidelity She's Your Sister