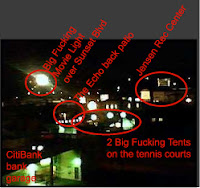 This is why it took me 45 minutes stalking out exiting Brite Spot patrons for a parking spot Monday night in Echo Park. A good portion of lakeside parking and streets up to the Echo (the actual shoot location) were blocked off for production trucks. Didn't help that the Horrors were playing either on an otherwise more mellow (parking wise) Monday night lineup.

At least Film LA left a notice on the door of my apartment complex for today's filming - well I found it this morning on the outside steps* - and it answered my question if I'll find parking easy tonight.

From zap2it:
""O.C." creator Josh Schwartz and producer-director McG are extending their relationship beyond that show's forthcoming end.

..."Chuck" is a drama laced with humor about young spies co-written by Schwartz and Chris Fedak. In addition to directing, McG will serve as an executive producer with Schwartz, while Fedak and Peter Johnson will co-exec produce."

From Variety:
"Project is said to be in the vein of the quirky late '90s feature "Grosse Pointe Blank," which starred John Cusack as an assassin-for-hire with a sense of humor. "

* to be fair, I was gone all weekend and was just getting in last night.
Echo Park