I've been spending a lot of time in Long Beach lately and by a lot I mean visiting twice this month. Wednesday I spent far too long suffering through a craptastic band before catching the new-ish Katie the Pest lineup. Now I'm at worst indifferent at bands I don't care for yet this one's negative attitude and posturing drove me outside swearing I was going to find a way to take them down in this blog. They were that annoying and weren't supposed to be playing at all forcing a reasonable 10ish set into a midnight set and I was already tired/a little sick to start off with. grr.

Thursday I enjoyed some gelato outside at a metal table with sprinkles on my words coming out at a 10:1 ratio to words responded and there was nothing wrong with that. 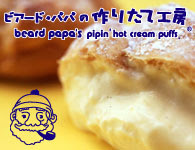 Saturday we decided to our mission was to eat cheesecake sticks and cream puffs at Beard Papa at the Hollywood mall & Highland retail and entertainment center. Secondary mission: trying not to call it papa beard, bearded man, grandma beard'n'puffs or whatever made us laugh.

A special note to tourists: If you're standing there on Hollywood Blvd. near the Metro station watching a guy spray painting space landscapes, first you can get better ones on Venice Beach for cheaper but secondly, just because you see a camera crew interviewing Posh Spice and Beckham doesn't mean you need to rush into me, my cream puff , or jump out of moving cars with cameras in hand screaming. This is especially true when it was completely fake and the cameraman is focusing on the crowd, the posh spice wasn't thin enough and that guy looked more Brad Pitt than Beckham. Oh he didn't have a cane either.

I couldn't have been happier making a late night choice to drive down to the Prospector on Sunday to catch Deep Sea Diver. A little more straightforward approach than last time which made it one her stronger sets I've seen.

We sat in a booth enjoying the sounds of the Gingerbread Patriots (as I couldn't see them that well) with a Stella in hand chit chatting with Corey about striped shirts and flannels until DSD was about to start.

As we waited near the stage, there were two ladies sitting at bars edge having some fun among their surroundings. One could not stop playing with the hair of the guy in front of me, which would be fine if he actually knew them and how he took in the butt touching in stride was quite admirable. A couple minutes later the other friend tapped my shoulder and asked what the next band was called.

"Deep Sea Diver." I happily answered.
"Deep Sea Diver?"
The repeated answer I took as confusion.
"Jessica Dobson's band."
I said as this would help her more but in returned we both pulled back a bit and she gave me a weird look. It's possible I accidentally shot her an eyebrow but I swear it was unintentional. After a pause nothing was said so I smiled and turned my attention back to the stage.

Eventually the band was introduced to the audience a few songs in and from behind me I heard the girl deadpan to her hair playing friend, "I knew that. That guy that told me was right. He's like MacGyver."

Duh, I already knew that.