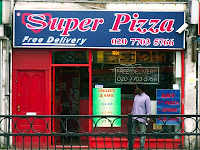 I've been a little sick lately which I originally marked as allergies but the product must be misbranded I fear. Allergies are not suppose to make me ill to my stomach but maybe it was the leftovers that were a day little over leftover status. Maybe I should have stopped eating it after the second or third day of being sick. hmm.

I haven't gone out much since Kiss or Kill last week which I forgot to write about it. Let's just say it was packed but not sold out as advertised. Let's just say whatever that UK band and IAMX were good but a tad boring for my tastes. Let's just say that I would've enjoyed them more while driving or working - but live they were just blah. More time was spent outside chatting outside with folks I knew and some not so well such as TK from Indie 103 who was telling the group I was standing in that all his shirts were thrown out due to a lost in translation instructions to the cleaning lady. All he had on was a zipped up track jacket in place of a shirt but John 99 gave some of the freebies to tie him over. Seemed very nice.

Let's just ask am I talking about last week? Well because everything after Kiss or Kill was perfect and funny and cute and yup that's all folks.

Anyhow other then trying Cafe Vegan across from CBS studios on Friday I've done nothing, did nothing until heading out Wednesday night to the SilverLake Lounge for a show (Deep Sea Diver, the Ebbs) and all I want to tell you is that I had a total OMG someone talked to me high school moment that night but I think I played it cool since it was just small talk and all, but still, you know insert happy face smiley here.

Last night had dinner at Farmer's Market, did some shopping, saw Danny Bonaduce shopping, then headed out to Audio at Three of Clubs only to find a shoot for some Dean Cain NBC CBS pilot going on in the parking lot so a little worried it was canceled but it was wrapping up . Had a beer, had a good talk then made it over to Canters/kibitz room to catch Steel but mostly to say happy birthday to Zach and hello to JP.

It was more fun than it sounded but I'm being all selfish with details today.