The Reaping is big heaping waste of time.

This movie doesn't know if it wants to Carrie or The Omen and while I'm down with predictable endings at least they could've made it interesting. Throw in some retarded special effects and save for the locusts plague, the others come off as more comical than foreboding enough to cause a chill down your spine. Badly CG animated cows dying never looked funnier. 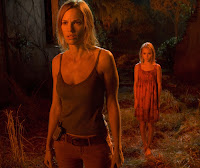 So the movie focuses on the little girl (don't they all do these days?) as the cause of biblical plagues centrally located in small, backwater, overtly religious town as master miracle debunker/onetime ordained priest Hillary Swank drives in to find the scientific reason. Did I mention she lost her faith? Did I mention that there ar evil up in dem swamps?

The wonderful actor Stephen Rhea plays a priest friend who hardly used and easily could be replaced with a scene of the researchers googling information while Hillary Swank's partner is there to drive the truck or something. I'm not sure why this character exists. The only thing not predictable was the lack of reaction as he was only non-white (i.e. black) guy there. If you're going to film in a Louisianan swamp, I want at least one stereotypical, creepy, racist degenerate in it. gees.

An utter piece of crap that I'm sure Ms Swank was optioned into.
Not scary or creepy at all.
Pointless plot + Pointless characters = I actually thought about leaving.

Two out of ten Loranges for making Hillary Swank look good in those pants and the decent locust sequence that most of the sfx budget apparently went to.
movie review The Reaping