April 27, 2007
My friend (MFR) at Vet School on St Kitts just sent me some cool pictures of sea turtles coming to lay their egss. Pretty neat so I thought I would share. 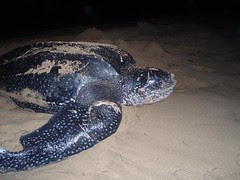 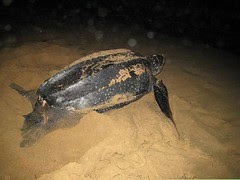 Sorry for the mass email, but I just wanted everyone to see this. From March to June is mating season for sea turtles and St Kitts is one of the islands that they build nests on. Since they are endangered, it is a very big deal. All kinds of people (students, conservationists, hunters, tourists) walk the beaches every night to try to spot a sea turtle. Most never see one. I know of a couple people that have walked the beaches almost every night for the past month or so and still have not seen a sea turtle! So when Megan and I met a guy who knew where to find the sea turtles, we did not get our hopes up, but we went anyway because we had nothing better to do. We got to the beach at about 10.30 pm. We saw our first turtle at 12.30 am. It was in the process of covering its nest. Then, about 10 feet down the beach, was another turtle that was in the process of covering its nest. So we watched the two of them cover the nests and then make their way back to the ocean. We were more than satisfied with that because we were lucky enough to see not one, but two sea turtles! On our way back to the car, we tripped over some fresh turtle tracks and found a turtle that was just in the process of digging a hole to lay her eggs in. So we got to watch her dig the hole, actually lay her eggs, and then cover them up before heading back to the ocean. It was so amazing. I wish I could describe it to you. These turtles are enormous. They probably weigh about 600-1000 pounds, depending on the age of the turtle. And they live for a long time too, so the turtle you are looking at may be like 80 years old! Anyway, we were more than lucky to see one turtle, much less 3 in one night! So I just wanted to send you a couple pictures so that you can all fully appreciate how awesome seeing these turtles was! Sorry if I sound super lame, but I am so excited that I got to see them!!!
Sea Turtles St. Kitts