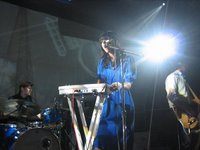 Monsters Are Waiting...photo stolen off myspace

A couple weeks ago I spent some time after work cruising along the shop sign lined streets of downtown Los Angeles. 30 miles wasted driving through congested intersections, over the 101, into Chinatown then a loop back up Spring Street.

Eventually I ordered a mental course change towards Hollywood more so to head in the right direction of the Monsters Are Waiting show at the Troubadour then for any other reason. Still had a couple hours to waste so I parked by IHOP and trekked it up to the Hollywood & Highland shopping center to grab a cup of coffee and tourist watch.

Basically the only reason one would go there because
Hollywood & Highland is boring.

What you'll notice is that tourists can't dress themselves.

Either they play it safe and wear matching colors as some sort of safety measure (the paranoid tourist of an evil Los Angeles) or the more retarded guy I saw apparently just keep updating his vests with new long, untucked button up shirts.

Maybe he was big Full House fan or something.

Not that I dress well or all those ugg boots with some hippie blouse, a boa and designer cowboy hat wearing ladies seen in this city aren't justifiably laughable either, but at some point you just have to let old fashion styles go. Don't worry people, let that vest and long sleeve button shirt fly free to the heavens. If Corey Feldman could give them up, so can you.

So why am I writing about an evening from over a week ago?

First photo by Jenn McCune, others by Keven Fedirko

Okay they looked normal cool (not fake poser hipsters) in a rock band sort of way
They played their instruments like rock star experts.
They said they were from Amsterdam.
I would even say they rocked.

Problem was that they sounded too fucking much like Bon Jovi for me.

All the good rock parts of the Bon Jovi experience were in effect but fortunately without the big hair and Heather Locklear metal hoop earring fans. I'm sorry, but three songs into it I just couldn’t take post traumatic flashbacks of my youth anymore.

I'm not saying Bon Jovi were a bad band 20 years ago; I mean they are a dried husk of themselves these days. A husk torn through its cellouse threads, with frayed edges turning a wrong color of black-green.

Anyhow don't let my personal hatred of all things Bon Jovi get in your way of this band. I'll be the first one to tell you that I don't know what I'm talking about 90% of the time and these guys should be given a listen to...especially if Bon Jovi and Full House is your thing.