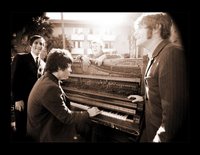 On Saturday was the monthly picnic and I should be writing about Underwater City People and how they played the old stuff and how they are taking a different route with the new album.

I should also mention how Chissum Worthington prerecorded all his segue ways and lip-synched to them. You could barely tell unless you were upfront. I swear he does it more for his own amusement than ours.

I should do all those things but I going to talk about The New Fidelity instead.

I've seen the New Fidelity many times since Midway played with them out at King Neptune’s. The pull in a good crowd, with many a cute girl [redacted] among their many fans.

Here's my review:
I liked them.
They play a spot on cover of The Jam's song "Town Called Malice."
They play the next three Fridays at Kiss or Kill.

Here's a not that useful review off their site below:

"Aside from their masterful harmonies, the New Fidelity sound nothing like the Beach Boys and everything like the soundtrack to an ’80s movie that was never made.
Take the wistfully danceable "Casa Grande" for instance, about a "sunny winter’s day bike ride through Long Beach." John Cusack should be on that bike! Or "First Day," about doing dishes in your apartment and reflecting on the way that love sometimes walks into your life . . . and fucks it up! Molly Ringwald is doing those dishes right now! Seriously!"--Alison Rosen, OC Weekly 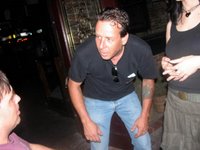 ok after all that fun and music finished, what remained was myself, serina, ashley, the pumpkin and mike schnee aka chissum worthinton sobering up in the Old Towne Pub's patio until 9pm.

As we discussed taking a walk around Old Town Pasadena, there this guy (pictured) hitting on the pumpkin and for some reason he was inspired to try to get schnee to show his penis to us all.

It was a weird attempt to impress the pumpkin I think. God knows I've tried but never took this route in my feeble attempts. Good thing 'cause weird guy wouldn’t stop even after his friends kept calling him back and saying hey that's looking like you're going gay from over here.

Friends who stand around bullshitting instead of walking will eventually lead to me yelling at them top walk more than once.

This will not impress the pumpkin either.

Even after they thougt it funny to let me walk ahead and turn the corner I still managed to have a little fun on a dare to go lay down on a couch in a storefront display. I almost did it and that show off schnee did it with contemptuous glee. Yeah you're better than me. I get it.

I failed again to impress the pumpkin.

Our grand walkabout lasted a whole three blocks with an ending at Subway. Food help but so did closing my eyes in an attempt to block out schnee and his of so funny ways. Oh everybody loves schnee. I get that too.

After that we all went to a party that was fortunately pretty mellow then I got bored and left. blah.

oh pumpkin,
how can I ever impress you?
new fidelity